While slavery is supposed to have stopped nearly 200 years ago, tens of thousands of people are in modern slavery in the UK today. Today, on Anti-Slavery Day 2019 (18 October), we’re asking people not to look away but report their suspicions.

Most people enslaved in the UK are trafficked from overseas, but about a quarter are British nationals. The most common countries of origin are Albania and Vietnam, and also Nigeria, Romania and Poland.

Exploitation in the UK takes a variety of forms, but most commonly forced labour, sexual exploitation, domestic servitude, and forced criminal activity. It often starts with people trapped in poverty who might get an offer of a job. To secure the job and get to it, they often have to borrow money.

On arrival, the job and the conditions are not what were promised. Passports are often confiscated, their money is managed for them, they’re told their debts must be repaid before they can leave, and violence or threats are used against them and their family back home.

People are most frequently trafficked in the UK to be forced into work with little money, under threat and in fear. This might be in agriculture or fishing, construction, care homes or manufacturing. Some industries such as nail bars, takeaways or restaurants and car washes are more frequently found to be exploiting people in this way. Women and girls are often trafficked for sexual exploitation, or domestic slavery, while children can be made to work in drugs production, petty theft or begging.

To better understand, tackle and raise awareness of this work, the North Yorkshire and City of York Modern Slavery Partnership was set up in 2018. Its members include community safety partnerships, local government agencies, North Yorkshire Police and the Fire and Rescue Service and charities such as the Red Cross.

With these partners, we work to ensure businesses adhere to rules and regulations around employees’ legal status, safe private rented accommodation, environmental health and health and safety.

We also encourage people to be vigilant for any signs of forced labour. Do workers seem anxious or fearful? Are they dressed properly for the job? Can you see any injuries? Are they brought to and from work?

Don’t stand by if you suspect that slavery or trafficking might be happening near you or if you’ve seen something that’s doesn’t seem right. Report it to police on 101, or report it to the Modern Slavery Helpline – more information is at www.modernslaveryhelpline.org.” 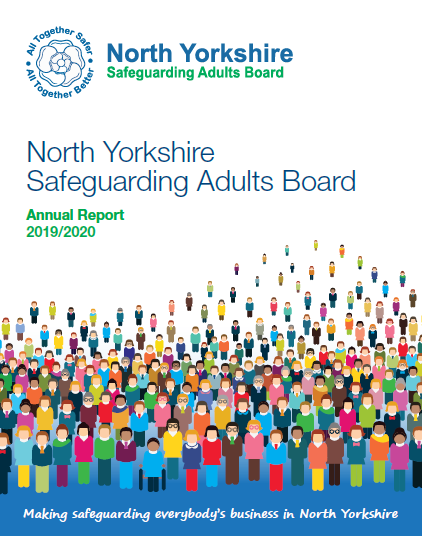 We are pleased to share with you our annual report for 2019/20 and accompanying easy read summary. You can download...